Keith Sturgill, vice president and chief information officer for Eastman Chemical Company, was awarded the 2017 Distinguished Alumni Award by the Department of Computer Science on April 21.  Mr. Sturgill was welcomed back to campus by faculty and students, and gave the final lecture of this year’s Distinguished Lecture Series.  Sturgill spoke about technology’s ability to solve problems in the corporate arena and how young professionals can harness that ability in their careers throughout various disciplines.

“Virginia Tech was a key factor to the successful trajectory of my career,” said Sturgill. “I received an education that prepared me to think broadly and thrive and be innovative in an environment that was ever changing and touched many areas of not only information technology but also the chemical industries.”

Sturgill joined Eastman in 1986 as a systems analyst after graduating from Virginia Tech. He has had various and growing responsibilities around implementation of enterprise wide technologies that have significantly impacted the business strategies and financial health of Eastman.

A native of Wise, Virginia he earned a bachelor’s degree in computer science from Virginia Tech in 1986. Sturgill is also a graduate of the Tuck Executive program at Dartmouth College, and has served various roles in multiple IT associations. He has been Chairman of the Board of Directors of America’s SAP User Group since 2011.

Currently he leads the strategy, use, and delivery of information technology services to Eastman’s global businesses. He is also responsible for driving improvements and productivity across Eastman through the widespread use of Six Sigma methods and leadership. Under Sturgill’s tutelage his organization delivers technology to nearly 11,000 Eastman employees spread throughout the company’s international operations. 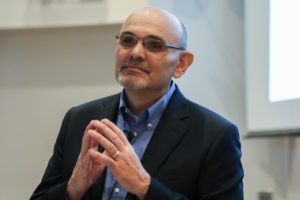 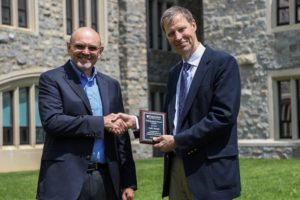 Jessica Zeitz Self had become accustomed to being in the minority.  As she made her way through the doctoral program in the Department of Computer Science in the College of Engineering at Virginia Tech, Self, who earned her Ph.D. in 2016, was always mindful of the fact that she was one of only a handful of women.  No wonder.  Women who earned undergraduate degrees in computer science in 2015 were just 18 percent of the academic population, according to the National Science Foundation.  When Self was hired as an assistant professor of computer science at the University of Mary Washington this year, she became part of a professional cadre of women that represents only 25 percent of the total STEM workforce in the industry.

Self’s collegiate experience at Virginia Tech allowed her to become a champion for diversity in her field, however. Being one of just three women out of a cohort of 40 in 2011, she made it a priority to weave diversity into her academic training.  “One of the main issues with the gender gap in computer science is that girls simply aren’t exposed to what computer science is,” said Self.

In the fall of 1994, a 17-year-old Damian Salas left his home in Poquoson, Virginia, and moved to Blacksburg, Virginia, to begin this freshman year at Virginia Tech. It wasn’t long before he became immersed in the university community and found himself searching for Hokie sports information that didn’t seem to exist in any one place. For the computer science major, the need for a website dedicated to the university’s athletic teams was a no-brainer. His skills and passion, combined with the emerging World Wide Web, created the perfect opportunity for Salas to “Invent the Future.”

Today, Salas, the senior director and webmaster of hokiesports.com, embarks on a 3,785-mile bike trip across the U.S. to raise awareness and funds for multiple sclerosis research.

Dr. Ryan McMahan, CS@VT alum and assistant professor in the Erik Jonsson School of Engineering and Computer Science and the School of Arts, Technology, and Emerging Communications, recently was awarded a $544,000, five-year grant to pursue a novel approach to workplace training using virtual reality (VR) technologies.  The NSF Faculty Early Career Development (CAREER) Program provides support for junior faculty who have demonstrated outstanding research and teaching skills.  McMahan graduated with his Ph.D. in computer science in 2011 under the guidance of professor Doug Bowman.

Jin-Hee Cho has received the Presidential Early Career Award for Scientists and Engineers, the highest honor bestowed by the United States Government on science and engineering professionals in the early stages of their research careers. The 105 winners will receive their awards at a Washington, DC ceremony this spring. Jin-Hee received her M.S. and Ph.D. degrees in computer science from Virginia Tech, under the advising of Ing-Ray Chen.

Dr. Cho is currently a computer scientist at the U.S. Army Research Laboratory in Adelphi, Maryland. Her research interests include network security, trust and risk management, cognitive modeling, and network science. She received the best paper awards in IEEE TrustCom09 and BRIMS13. She is a recipient of the 2015 IEEE Communications Society William R. Bennett Prize in the field of Communications Networking. She is a senior member of the IEEE and a member of ACM.

Dr. Cho is looking to extend her research in two potential directions: (1) trust to enhance autonomy in tactical environments; and (2) trust to facilitate opinion spreading in distributed environments. First, autonomy in tactical networks is a critical aspect for a distributed system to be highly reconfigurable, agile, and scalable in the presence of hostile entities. Although the role of trust in enhancing autonomy has been discussed in other domains such as bioethics, social psychology, and sociology, it has not been fully addressed in tactical networks whose characteristics introduce many difficult design challenges including high dynamicity, hostility, tempo, and uncertainty. Dr. Cho’s trust research can be extended to provide solutions for autonomous systems in the Army settings that consider heterogeneous entities including both humans and machines. Second, as social network/media services (e.g., Facebook, Twitter, LinkedIn) become more popular than ever, social network analysis that seeks to infer trust relationships (e.g., by investigating patterns in relationships, interactions, and opinion flows) can provide crucial insights, which can be used to predict and control critical aspects of decision-making processes. These two areas can be smoothly extended from Dr. Cho’s current research efforts, which are also well aligned with ARL and DoD mission areas.