Kurt Luther’s research partnership is revealing the differences in the latitude and attitude of Americans during the Civil War era one historical document at a time and it’s inviting “citizen historians” to transcribe, tag, and discuss primary sources. It may also open up discussions into issues of race, citizenship, and identity.

Once again, May found the Virginia Tech ACM ICPC Programming Team traveling across the globe to compete in the ICPC World Finals.  This year the competition was held in Phuket, Thailand, and included 128 teams, selected from a record 2,736 participating universities during fall regional contests.  The 2016 Virginia Tech team consisted of CS majors Dustin Pho, Peter Steele, and Chris Wu, with Dr. Godmar Back as their coach.

According to Back, “The competition involved 13 problems, of which the top three teams (St. Petersburg State, Shanghai Jiao Tong, and Harvard) solved 11, 11, and 10, respectively. The Virginia Tech team solved four problems, which ranked it 74th, an improvement over the last two years where we finished 92nd. The team is particularly proud of finishing 9th among the 25 teams from North America, which is our best showing since at least 2005.  The only North American teams finishing ahead of VT were Harvard, MIT, Waterloo, UCF, Berkeley, Cornell, Stanford, and Rice.” 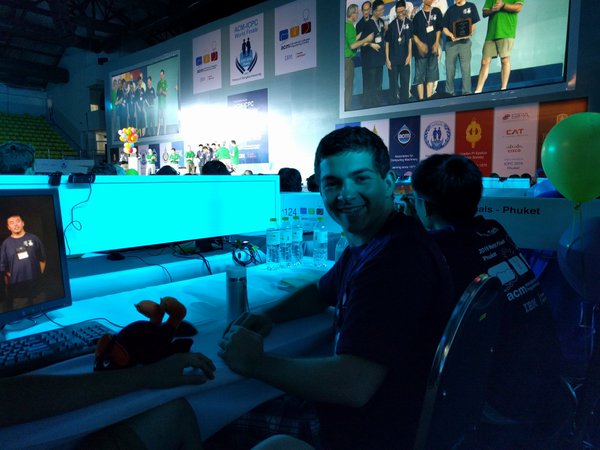