The 3rd Virginia Tech High School programming competition took place on Saturday, Dec 10, 2017. Dr. Godmar Back served as contest director and head judge. 101 teams from 25 high schools from 5 states took part at the 3rd online Virginia Tech High School contest that is run by volunteers from the ACM ICPC Programming Team at Virginia Tech. This was the first year that the event was advertised on a national site (Google CS4HS), which attracted teams from California, Alabama, North Carolina, and Maryland in addition to teams from Virginia.

The popularity of the event continues to expand. The competition has grown in 3 years from 24 to 58 to 101 teams. Dr. Back said, “We know that there is demand for more”.

More than 1,200 submission was entered in 5 hours, with 430 successful solutions. You can find the scoreboard and problem set (html, pdf). 100 out of 101 teams solved at least one, 56 solved 4 or more. The problems were developed by students from the programming team (Neha Kapur, Peter Steele, Harrison Fang, Daniel Moyer, Andriy Katkov) and Dr. Back.  Much to Dr. Back’s surprise, 4 teams solved all 10 problems (one in half the time).

To participate, teams needed to be sponsored by a teacher or parent coach. At most schools, the students got together at their school for the day with their teacher to participate in the contest. Teachers from several schools provided very positive and expressed that their students enjoyed the contest.

This year, for the first time, a team from Blacksburg High School participated. Prizes were sponsored by Eastman Chemical, the Computer Science Resources Consortium, and stack@cs

More detailed information about this year’s contest can be found here. Please spread the word about this contest to colleagues or teachers! 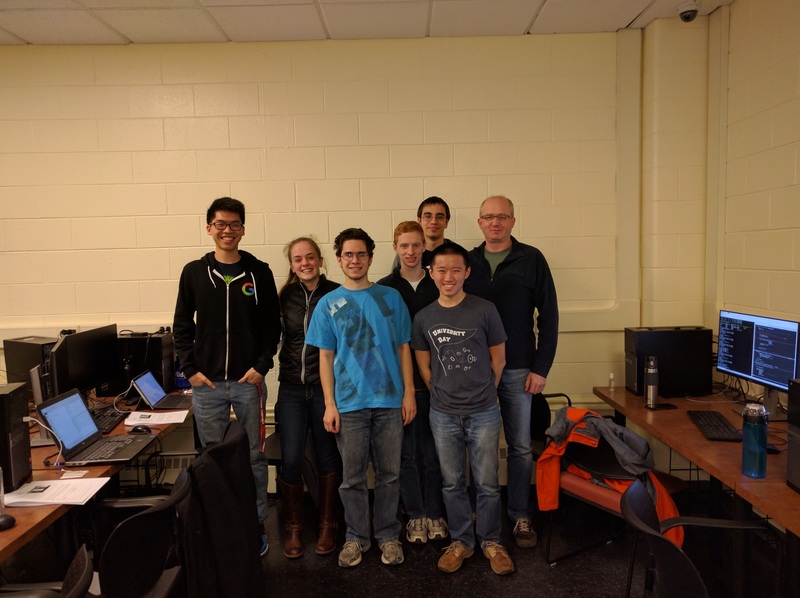 For the fourth straight year a team from Virginia Tech has qualified for the prestigious ACM International Collegiate Programming Contest (ICPC) World Finals.  This year’s Mid-Atlantic regional contest, held on November 5, included 177 teams from over 100 schools.   Under the leadership of Dr. Godmar Back, ten Virginia Tech three-person teams participated in the regional contest this year.  The team consisting of CS majors Peter Steele, Chris Wu, and Andriy Katkov finished first.  They will be representing Virginia Tech at the 41st World Finals, to be held this coming May in Rapid City, SD.

The performance of all the Virginia Tech teams was outstanding, with four teams finishing in the top 14, and eight in the top 30.  According to Dr. Back, “I need to acknowledge the enthusiasm and hard work of all involved. This year, I had a group of 60-70 dedicated students that attended the Saturday practices. We did five full (five hour) practices on Saturdays during October and September, plus a qualification contest the week before, plus an additional six virtual contests on Wednesdays and Saturdays. I would also like to thank our sponsors, Eastman Chemical, stack@cs, and the CSRC!”

Congratulations to all the ICPC participants:

Dr. Edward Fox, professor of computer science, has been named an IEEE Fellow for leadership in digital libraries and information retrieval.

The IEEE Fellow grade is conferred by the IEEE Board of Directors upon a person with an outstanding record of accomplishments in any of the IEEE fields of interest. The total number selected in any one year cannot exceed one-tenth of one-percent of the total voting membership. IEEE Fellow is the highest grade of membership and is recognized by the technical community as a prestigious honor and an important career achievement.

Dr. Fox directs the Digital Library Research Laboratory and the Networked Digital Library of Theses and Dissertations.  He is known for extraordinary contributions to technology-enriched learning activities in the classroom. When asked what this honor means to him, Dr. Fox said, “It is always an honor to be recognized in such a way and I’m grateful for all the people who have worked with me over the years.”

Fox has held multiple leadership positions in IEEE.  He is a member of the IEEE Thesaurus Editorial Board and a member of the Executive Committee of the Technical Committee on Digital Libraries; he served as chair of TCDL from 2004 to 2008. He has been an IEEE Senior Member since 2004. He was on the editorial board of IEEE Multimedia from 1997-2003. Fox was General Chair for the ACM/IEEE Joint Conference on Digital Libraries in 2001, and has served on the JCDL steering committee since 2003, including as chair from 2010 to 2014. Fox also has served on the program committee of many IEEE conferences and workshops.

Fox has been (co)PI on over 123 funded projects.  He has co-authored and/or edited 18 books, and (co)authored 120 journal/magazine articles, 49 book chapters, and 211 refereed conference/workshop papers. These are in areas including digital libraries, information storage and retrieval, machine learning/AI, computational linguistics (NLP), hypertext/hypermedia/multimedia, computing education, and electronic publishing.  His work has been cited more than 14940 times and his h-index is 56 according to Google Scholar.  Fox has graduated more than 50 masters and Ph.D. students.

The IEEE is the world’s leading professional association for advancing technology for humanity. Through its 400,000 plus members in 160 countries, the association is a leading authority on a wide variety of areas ranging from aerospace systems, computers and telecommunications to biomedical engineering, electric power and consumer electronics.

Dedicated to the advancement of technology, the IEEE publishes 30 percent of the world’s literature in the electrical and electronics engineering and computer science fields, and has developed more than 1300 active industry standards.  The association also sponsors or co-sponsors nearly 1700 international technical conferences each year.  If you would like to learn more about IEEE or the IEEE Fellow Program, please visit www.ieee.org.