A team of six undergraduate and graduate students won, the Caring for the Caregiver Hackathon sponsored by the Lindsay Institute for Innovations in Caregiving. Three members of the team and the faculty advisor came from the Department of Computer Science.  The winning design, called CareFood, helps caregivers develop ideas and plans about what to eat, given the burdens of caretaking and the many restrictions on food that people with Alzheimer’s disease may face due to their medication regimes.  It relies on location-based crowdsourcing for recommendations.

CS team members Maoyuan Sun, Peng Mi, and Junyang Chen stayed up throughout the night to create a working prototype of the front end.  Dr. Deborah Tatar, CS faculty, coached the team. Yujun Liu, from human development, represented the gerontology knowledge and assembled the team.  Yong Sue from the Pamplin School developed the required approach to business, and Ross Ritsch, a freshman in International Studies, provided a fresh voice and served as a spokesman during the project presentation.  Mary-Margaret Fosmark, a caregiver provided by the sponsors, advised the team about caregiver needs. 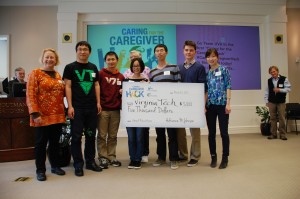 Balaji Subramaniam, CS Ph.D. student, was selected as the College of Engineering Outstanding Doctoral Student this year.  The award recognizes outstanding scholarship and service and was given out at the Graduate Awards Banquet on March 26, 2015.  Join the CS Department in congratulating Balaji and his advisor Wu Feng!

Denis Gracanin (Computer Science), Joseph Wheeler (Architecture) and a team of interdisciplinary researchers from across campus unveiled the innovative future of kitchen design and construction  at the Kitchen & Bath Industry Show in Las Vegas in January 2015.  The show is North America’s premier annual event dedicated to the kitchen and bath industry.  According to the VT Daily News, “The kitchen is the first phase of a three-year plan to construct a two-story FutureHAUS.  The next phase of the FutureHAUS design process is the addition of a living room alongside the kitchen that will debut at the American Institute of Architects national convention May 14-16 in Atlanta”.  To read the entire story please visit.  Denis Gracanin is associate professor in the College of Engineering’s Department of Computer Science.  Joseph Wheeler is a professor of architecture and co-director of the Center for Design Research and LumenHAUS lead researcher.

ACM’s Special Interest Group on Software Engineering (SIGSOFT) has named Professor Barbara G. Ryder as the recipient of its 2015 Influential Educator Award “For significant contributions in software engineering education, graduate student and faculty mentoring and efforts to improve the representation of women.” Dr. Ryder is Head of the Department of Computer Science at Virginia Tech, where she holds the J. Byron Maupin Professorship in Engineering.

The award will be presented on 22 May 2015 at the 37th International Conference on Software Engineering (ICSE 2015) in Florence, Italy (http://2015.icse-conferences.org/). This award is presented annually to an educator who has made significant contributions to, and impact on, the field of software engineering with his/her accomplishments as a teacher, mentor, researcher (in education or learning), author, and/or policy maker. The award is accompanied by an honorarium and travel support to ICSE.

Professor Barbara G. Ryder has been deeply engaged in education and mentoring in software engineering and programming languages for more than 33 years. She is an exceptional graduate mentor having graduated 15 Ph.D. and 3 M.S. students and supervised 4 postdocs. She is an influential leader in diversity, both nationally through activities with CRA-W and NCWIT and through outreach at both Rutgers University and Virginia Tech. Dr. Ryder’s mentoring extends beyond her own research group. She was awarded Professor of the Year (2003) while at Rutgers, by the Computer Science Graduate Students Society award for excellence in teaching and was the recipient of the Rutgers University Graduate School Teaching Award (2007). As a department head at Virginia Tech, Dr. Ryder established an ongoing formal mentoring program for both assistant and associate professors. Dr. Ryder is an ACM Fellow (1998) and has received the Rutgers’ Presidential Award as a Leader in Diversity (2006) for her activities to increase the diversity of computing. Recently, she was given the 2014 Virginia AAUW Woman of Achievement Award in recognition of her efforts. She was a co-founder of the NCWIT VA/DC Aspirations Awards Affiliate, which celebrated its fourth year of awards in 2015.  Read the full story here. 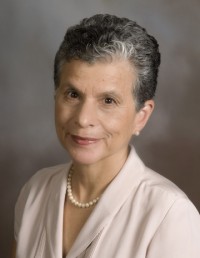 The Virginia Tech Graduate School announced the seven inaugural members of the university’s chapter of the Edward A. Bouchet Graduate Honor Society.  Ashley Robinson, CS doctoral candidate, was selected to join.  Ashley is a native of Chesapeake, Virginia.  She is investigating the attitudes of African-American middle school girls toward computer science and the factors that influence these attitudes.

The Bouchet Society was established in 2005 by Yale and Howard universities and named for the first African-American to earn a doctoral degree in the United States.  Bouchet graduated from Yale College in 1874 and earned his doctoral degree in physics from Yale University in 1876.  The society’s goal is to create a network of strong scholars and professionals who “serve as examples of scholarship, leadership, character, service, and advocacy for students who have been traditionally underrepresented in the Academy,” according to its webpage.  Virginia Tech is among 11 university partners with Bouchet Society chapters.