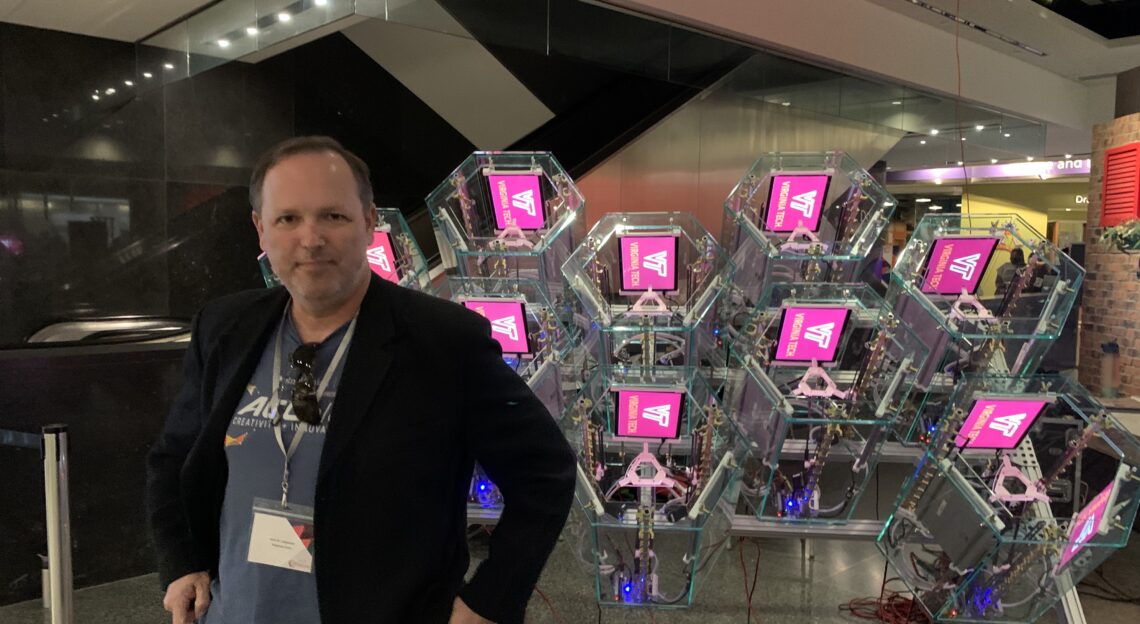 Kirk W. Cameron, Ph.D. is a Professor of Computer Science at Virginia Tech and an IEEE Fellow. As of August 2021, he is the inaugural faculty lead (i.e., department head) at Virginia Tech’s Innovation Campus. From 2012-2022, he was Director of the stack@cs Center for Computer Systems (recently ranked #26 by US News). He is a Distinguished Member of the ACM; and an associate editor for the Journal of Parallel and Distributed Computing and for IEEE Transactions on Parallel and Distributed Computing. From 2018-2022 he was Associate Department Head for Research and Engagement. He was Associate Department Head and Graduate Program Director from 2014-2017. From 2017-2018, Prof. Cameron held a Distinguished Visiting Fellowship at Queen’s University Belfast from the U.K. Royal Academy of Engineering.

The central theme of his research is to improve power and performance efficiency in high performance computing (HPC) systems and applications. Accolades for his work include NSF and DOE Career Awards, IBM and AMD Faculty Awards, and being named Innovator of the Week by Bloomberg Businessweek Magazine. He pioneered Green Computing (Green500, SPECPower, PowerPack, grano.la) and his power measurement and management software has been downloaded by more than 500,000 people in 160+ countries.  He is a recipient of the HPDC 2017 Best Paper Award and his educational SeeMore kinetic cluster was named the second best RaspberryPi project of all time by MagPi Magazine. His work consistently appears in The New York Times, The Guardian, Time, Newsweek, etc. His educational LACE kinetic sculpture (pictured above) recently appeared at the Smithsonian National Museum of American History in Washington, D.C.

I care more about impact than numbers, but here are some other details:

If you want to understand the impact my research has had on computing, keep reading or jump to: Green Computing, Power-Performance Modeling, Computer Science Education, or I/O Performance

National Science Foundation, “CAREER: High-performance, distributed power-aware computing,” $402,203, 5 years. 2/1/04-1/31/09. Kirk W. Cameron (PI). Personal share: $402,203. If there is anything I’m widely known for, it is green HPC and data centers. Originally entitled “High-performance, power-aware computing” or HPPAC, this proposal, written in 2003 and based on ideas I first had in 2000-2001, is the first known submitted and funded research project in Green HPC — energy efficient large-scale systems. The research plan was years ahead of the community and the resulting work inspired hundreds (perhaps thousands) of researchers worldwide to study energy use in data centers and supercomputers. This work led to my co-founding Green500.org, my being a founding member of SPECPower, my early influence on the energy star program for servers, and the co-founding of energy-efficient software startup MiserWare, Inc. The original proposal name was adopted by colleagues for the IEEE HPPAC workshop at IPDPS that will celebrate 15 years in 2019.

Cameron, K. W. (2009). My IT Carbon Footprint. Computer, 42(11), 99-101. From 2009 thru 2017, I was an Associate Editor for IEEE Computer Magazine and the founding Green IT columnist. This is my favorite article that I wrote during that tenure and it received the most feedback from readers.

Cameron, K.W. and Pruhs, K. (eds.), “NSF Report on the Science of Power Management,” pp. 37, submitted to the National Science Foundation August 2010. (Technical Report No. VT/CS-09-19). This was an influential report that resulted from a workshop sponsored by NSF and organized by me and a colleague. The report led to a funded program at the NSF.

K.W. Cameron and J. Turner, “Systems, devices, and/or methods for managing energy usage”, [United States Patent: 8,918,657] [UK Patent: #GB2476606B]. This patent is a technique for bounding performance loss while maximizing power efficiency. This was the core technology use by MiserWare, Inc. to design the grano.la software. Grano.la reduced computer energy use up to 30% and was used by hundreds of thousands of people in more that 160 countries plus a number of universities and 3-letter agencies. MiserWare was a venture backed startup spun out of Virginia Tech.

*Ge, R., & Cameron, K. W. (2007). Power-aware speedup. Proceedings of the 2007 IEEE International Symposium on Parallel & Distributed Processing (pp. 1-12). IEEE. This is the first in a series of papers where I wanted to better understand the fundamental tradeoffs between power and performance at scale. The insight here was that energy efficiency in scalable systems results from exploiting inefficiencies in performance (e.g., communication overhead). Since existing models (e.g., Amdahl’s Law) ignore overhead, we generalized Amdahl’s Law to incorporate overhead and demonstrate the speedups possible in power-scaled systems.

*Song, S., *Su, C. -Y., *Ge, R., Vishnu, A., & Cameron, K. W. (2011). Iso-energy-efficiency: An approach to power- constrained parallel computation. Proceedings of the 2011 IEEE International Symposium on Parallel & Distributed Processing (pp. 128-139). IEEE. This is the second in a series of papers where I wanted to better understand the fundamental tradeoffs between power and performance at scale. The insight here was that if given a power cap at runtime we can control variables such as workload, number of nodes and number of threads, to maintain a fixed energy efficiency as we scale an application and system. Maintaining an iso-efficient configuration enables us to maximize performance at scale under a power cap.

*Li, B., León, E. A., & Cameron, K.W. COS: A Parallel Performance Model for Dynamic Variations in Processor Speed, Memory Speed, and Thread Concurrency. Proceedings of the 26th ACM Symposium on High-performance Parallel and Distributed Computing (HPDC 2017) (pp. 155-166). Washington, DC: ACM. doi: 10.1145/3078597.3078601 [19% accept rate] Karsten Schwan Memorial Best Paper Award (1/100 submits). This is the third in a series of papers where I wanted to better understand the fundamental tradeoffs between power and performance at scale. This work draws attention to the fact that while hardware and software designers have spent decades increasing parallelism and computation/memory overlap, no models capture the separation of CPU or memory performance from overlap. This fundamental omission results in inaccurate performance prediction of simultaneous changes in computational throughput — demonstrated with CPU, memory, and concurrency throttling. The Compute-Overlap-Stall model was shown to be the most accurate model for performance prediction under such conditions.

IMPACT ON I/O PERFORMANCE IN LINUX

VarSys (2016-) is a collaboration at the intersection of computer science, mathematics, and statistics to isolate, understand, and manage variability in software for high-performance and cloud-based systems. The VarSys project was made possible through a generous grant from the National Science Foundation (CISE CNS #1565314).

SeeMore (2014-) is a 256-node kinetic cluster of Raspberry Pi computers that visualize parallel computation through coordinated movement. SeeMore is an inspiring collaboration between computer science and art. SeeMore was made possible through generous grants from Virginia Tech’s Institute for Creative Technologies and the National Science Foundation (CISE OAC #1355955).

High-Performance, Power-Aware Computing (2004-2009) is the project that launched the Green HPC movement and resulted in numerous pioneering contributions including the PowerPack power measurement toolkit (2004-), the Green500 List (2006-), the SystemG Supercomputer(2009-2014), and venture-backed power management startup MiserWare and the grano.la software (2007-2014). This was all made possible from an NSF CAREER Award (CISE CCF #347683), an NSF infrastructure grant (CISE CNS #0709025), and venture capital from CIT, Valhalla Partners, and InQTel.